skip to main | skip to sidebar

You can find out all about the Bay One Acts Festival and our most recent festival: BOA X by going to www.bayoneacts.org.

See you there!
Posted by jessica at 10:23 AM No comments:

A dramatic meditation on puzzles and things that are puzzling, iconic and inconclusive identities, significant and insignificant life moments, and all the times you wish you hadn't had sex.

Directed by Kate Jopson/Woman’s Will

THE OPPOSITE OF ROMANCE

An imminent extra-marital affair is short-circuited by a possibly public post on Facebook. A play about middle age and marriage in the era of instant communication.

It's Christmas Eve near the idyllic shores of Maine's Wrang Pond. As Bella awaits her husband's return, a winter storm and an unexpected turn of events bring her face-to-face with an enigmatic stranger.

A woman waits for a bus and decides to fall in love and break up with the next man she meets before she gets on her bus. She has ten minutes to make it happen.

A couple discovers a strange pool of light in their living room that, whenever they step into, compels them to perform monologues.

A delightfully twisted tale of three little dumpling's epic adventure through the house one afternoon.

A mortgage fraud scheme turns into a clockwork frenzy as three suits struggle to get rich and escape unscathed. It's a simple premise, really.

A couple's relationship rewinds; a review of loss and love, in its absurdity and poignancy.

Cloud Flower explores the memory of the atom bomb's devastation of Hiroshima through the tangled dreams of one of its survivors. Using trademark imagination and physicality, the 11th Hour Ensemble presents an evocative take on the infamy of the Mushroom Cloud. 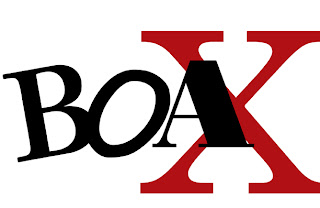 Thank you to all who attended our BOA X General Auditions!

We had a great day and saw over 70 actors for the 25+ roles available in our upcoming festival of original new short work. So much talent. The BOA X directors and playwrights are completely delighted by the range and skill of the Bay Area actor pool. Thank you Actors!

Now to the process of casting... fun.

We will post the cast lists of the shows in the next week or so.

Thank you to all who attended and good luck!
Posted by jessica at 8:36 PM No comments:

What: Please prepare a 1 minute contemporary monologue.
Audition may also include cold read.

Please include a headshot and resume.

BOA X: In the Works!

We are very excited that planning has finally begun in earnest for BOA X. Plays are making final selection, directors are signing on, producing partners are lining up and the look of the festival is being hashed out.

A formal announcement will be made in early December listing all of the BOA X players. For now, we can tell you that BOA X will feature a return of many of the favorites of last year's BOA, as well as some fabulous new artists.

We will continue to build our COMMUNITY by focusing on the ways in which we have grown together over the past year and have COLLABORATED to create adventurous, innovative and bold new work together. BOA X will be a celebration of our collaborations together and a breeding ground for the future collaborations between the artists of the BOA community. The festival will feature kick-ass new work that represents the best of small theatre!

BOA X will take place at Boxcar Theatre again this year in March 2011.

Boxcar Theatre
505 Natoma Street, SF
(between 6th and 7th and Mission and Howard)